The following article has been written by the mother of a baby born with a rare genetic condition called Trisomy 18 (also known as Edwards' Syndrome) and describes the impact on all those involved if conflict arises. 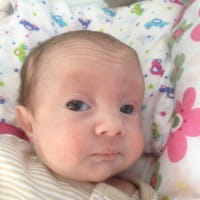 “While we do not all agree that this is the right course of action, as a consultant body on the neonatal unit, we have decided we can offer Rumer resuscitation as we would any other child.”

Winning! It should feel good. That is how you imagine it when you are caught up in what you and your ‘opponents’ see as a battle. It is you against them, and in this case the battle was over something more important than anything I’d ever fought for before: my daughter’s life.

My unborn daughter Rumer was diagnosed with a chromosomal condition called trisomy 18 when I was 23 weeks pregnant. Most babies with trisomy 18 are not born alive; of those who are, only a handful see their first birthday. Because of this high mortality rate, in the UK, full resuscitation and other treatments such as cardiac surgery, ventilation etc. are not offered to these children. They are left to die. Emerging evidence however suggests that treatment does improve the chances of survival. We knew we wanted full treatment for Rumer, and we walked into our first appointment with the neonatal team prepared for some opposition.

And we got it, in spades. All the arguments we had anticipated and more came out. Quality of life, pain and suffering, the child’s best interests, futility. It was full-on assault and we reacted, we played the game. The slightly threatening but still polite emails to people with influence; the seven page submission for the ethics committee with lists of research; the legal advice sought but never mentioned; the second opinion from just the right person. And yes, we won, in that appointment with a new neonatologist they said yes and that should have been that.

We had won, but still as mere parents in a system which we can never fully understand, we were at a disadvantage; the power was not with us; this was a case of David overcoming Goliath. But if you’re David, you start wondering if Goliath has really surrendered or if this is just a ploy; if you don’t trust them then perhaps they are lying to you, perhaps this is a trick, a trap.

Except of course it wasn’t. When you have been in a war and it ends, you don’t all shake hands and become best friends. Trust, if it was there in the first place, is lost. Peace is a fragile thing and both sides know it. We had won, but still as mere parents in a system which we can never fully understand, we were at a disadvantage; the power was not with us; this was a case of David overcoming Goliath. But if you’re David, you start wondering if Goliath has really surrendered or if this is just a ploy; if you don’t trust them then perhaps they are lying to you, perhaps this is a trick, a trap. You try and pin them down, push for written agreements, record appointments, insist on a letter from someone higher up, and maybe you get it.

On the other side, the losers of this war are already resentful that you won. There are internal squabbles they don’t want you to see, between those who agreed to the surrender and those who thought they should fight on. And you, the victors – the reminder of their loss – don’t just go away. They have to continue dealing with you, they have no choice. Not only that, but you are demanding more: all those agreements, letters; it must feel to them like you are rubbing their noses in their loss. You aren’t even grateful that they gave you what you wanted.

So with that history I gave birth to our daughter. A baby who nobody expected to survive all that long. But she did. Six weeks we spent in neonatal unit, and all that history between us and the neonatal team played out exactly as you would expect. Lack of trust leads to controlling, second-guessing, anxious parents. Resentments lead to a medical team that doesn’t want to give ‘special treatment’ and that wants to pretend the history doesn’t exist. Problems spiral. We end up in meetings over minutiae, over reading the notes; we can’t believe they want to make such a fuss about this; they can’t believe we can’t just trust them. We are at loggerheads.

So with that history I gave birth to our daughter. A baby who nobody expected to survive all that long. But she did.

Mediation gets involved and things get smoothed out for now, but resentments linger. We can’t wait to get out of there. Before we do, we get agreements from the rest of the hospital to treat according to clinical condition. Soon after that we leave; we don’t get the feeling of the staff are sorry to see us go.

Soon after that, sadly, we are back. We spend two weeks in general paediatrics, get home again but are back in four hours, and then another week in paediatrics, four weeks in intensive care and sadly Rumer dies on New Year’s Day 2016. The paediatric team never really questions treating Rumer, but old histories linger. These are our opponents’ allies: we question their motives and actions and they get tired of it; old patterns reassert themselves; even as we recognise it we have no energy to change it and neither, it seems, do they. Everywhere we go, it goes on. The ‘difficult parents’ and the ‘arrogant doctors’, same old story.

Winning it turns out is not all that great. It solves some problems but leads to others. Our memories of Rumer’s life are coloured by the aftermath of war. There shouldn’t have been a war. Our experiences serve to illustrate how an adversarial approach to communication leads to problems that don’t end when someone wins. There are going to be disagreements in healthcare, between patients and their advocates and health professionals. If when we had first disagreed, instead of opposition, there had been open discussion and listening, perhaps we could have reached consensus. Perhaps we could have all been on the same team, striving for the same goal.

In the end the actual goal – in our case, the best interests of Rumer – got lost in the fight between us and the health professionals.

In the end the actual goal – in our case, the best interests of Rumer – got lost in the fight between us and the health professionals. We fought a fight of treatment or no treatment and forgot that in the end we wanted the same thing: what was best for Rumer. Perhaps if we’d sat down and talked about that and not got sidetracked, we’d have realised that we were in fact in agreement on the principles and differed only in how we thought they should be implemented. Perhaps with open communication and discussion, exploration of the reasons behind our differing opinions, we’d have reached agreement. At least, hopefully, we’d have had more respect for each other, more mutual trust, fewer resentments.

Both sides have responsibility in a war and I acknowledge ours. We fought the battle because we felt we had no choice. To not fight it was unthinkable: we couldn’t let Rumer die for lack of treatment and I still feel the payout; those precious three months were worth the cost. But it was a high price. I am sure the health professionals too paid a price. In the end nobody won.