I met Emmy Myerson and her family in 2003, when I was working as a reporter for the BBC Panorama programme. I wanted to make a film which showed what life was like for parents struggling to look after children with complex physical and learning disabilities. We called the film “Survivors” because that is what Emmy and many other like her are: when she was born, nobody expected her to live. In fact there were many occasions when her parents, Tussie and David, found themselves preparing for her death.

They always believed that her care should be focused on providing her with the best possible quality of life rather than prolonging that life at all costs. They asked themselves and others, difficult questions about the purpose of medical advances which can keep babies, children and young adults like Emmy alive without knowing what the quality of those lives can or will be. They found themselves disagreeing with health and social care professionals about what would or would not be in her best interests.

Above all, they had to fight a more or less constant battle to get care and support for Emmy; a battle which they and many other families like them, had little or no idea lay ahead when they brought their baby home from hospital alive.

The experiences of Emmy and her family were one of the reasons why I decided to set up The Medical Mediation Foundation. Over the years, during many conversations with her parents, I’ve understood something of what it must be like to feel that you have to be struggle to be heard by some of those responsible for the wellbeing of your child. And what the impact of that struggle can be for all those involved – including some of the professionals who have heard all too well but can’t respond in the way they would like to because of scarce resources.

Emmy's Story: In Her Mother's Words 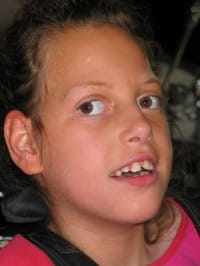 When you give birth to a child whose life is going to be bombarded with medical complexity, you begin a journey that is impossible to be prepared for. For the first 10 years we simply existed. Every four to seven months she would have a bout of pneumonia and we would prepare for her possible departure. It was a staggeringly difficult time.

My eldest daughter, Emmy, was epileptic in the womb. This means that the abnormal foetal movements during the last two months of my pregnancy were actually epileptic seizures. She had her first seizure outside the womb at three months, followed by many months in hospital, before being discharged into my completely untrained hands.

Emmy has what the professionals call PMLD, profound and multiple learning difficulties. She is quadriplegic, with cerebral palsy and intractable epilepsy. She cannot walk, talk, toilet herself, feed herself, etc. She can communicate of a fashion by laughing, crying and smiling, but you cannot be sure that it is controlled. When she was 10 months old (1992) we were told by the wise and wonderful at Great Ormond Street that she would die very soon. If she didn't die very soon she would die a little bit later. If she didn't die then she would probably be a vegetable for the rest of her ‘short’ life. There was no counselling or support. We saw a geneticist who told us not to have any more children, and that was it. There was the usual gaggle of meetings with social services, who offered us residential care or possibly a bit of respite, but they weren't sure. Our GP was very kind, but she had never had a case like this before.

For the next 18 months I had to deal with the hugely complex array of appointments, whilst having this dreadful thought in the back of my head that my daughter was going to die.

And yet no one believed in me. There was no joined up thinking. No early intervention, no support structure. No recognition of what that day at Great Ormond Street had done to us as a couple, or our little family.

When she was 4 we found Helen House Hospice in Oxford, and thanks to them many of these interruptions were made more manageable. We came to understand what life limiting meant. And how to come to terms with the fact that our gorgeous child was not going to live into adulthood. 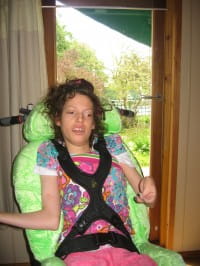 Because of the nature of our daughter's diagnosis we, my husband and I, decided early in her life that we wished her care to be palliative. To most people you will think of end of life hospice care. But for us it means whole life care. Which means that her life is about quality now, rather than using medical intervention to keep it going. Therefore we do not wish her to be tube fed, to be resuscitated, have intravenous medication other than pain relief, or any other intervention.

Her quality of life is about being able to make the very few decisions she can herself. This includes eating, which is under her control. And breathing. She and I have ‘agreed’ many times over the years that it is her call. She decides if she is going to wake up, not me. So far she has chosen to wake up.

When we first asked for no intervention I don't think we fully understood what we were saying. It was more a reaction to what everyone was doing, given that they kept telling us she was going to die. So if she was then let her. But now I do understand. She should never have survived. For whatever reason she did. That does not make it right to keep that life going 'just because you can'.

What a family like ours goes through is grieving for a very long time with the end never actually happening, and also caring. So two of the most stressful jobs wrapped up in one package. It appears to be taboo to admit how hard it is. As a society we don't seem to want to admit to the hurt of watching our children live half-lives, quarter lives even. Does Emmy have a quality of life? I don't know. Do I love her? Absolutely. Will I miss her? With all my heart. When she dies, will it be a relief? Without question.

My job is to make sure she is comfortable. That she has a reason to smile when she can. That she is loved by her family, and at the end of the day that her family have the energy and capacity to love her.

Gradually you recognise that extending this life isn't your call. You are simply a manager of a body. It is down to her if she wants to keep going. My job is to make sure she is comfortable. That she has a reason to smile when she can. That she is loved by her family, and at the end of the day that her family have the energy and capacity to love her.

Society now appears to be about extending life. Ticking medical boxes that enable life to be prolonged without necessarily asking the terribly important question. Who are we doing this for? Possibly it is for the people around me who do not understand what it is like to live with a time bomb. Because it is not for me, or my family. We have been through quite enough. And I cannot imagine it is for my daughter. What she has had to go through does not bear thinking about. So who else is there?

And why is it still taboo to talk about this issue. Why with an ageing population, and more babies surviving premature birth and birth trauma, is it still considered politically incorrect to tackle the really important and, lets face it, unavoidable issue, of who are we maintaining life for?

The question about quality of life appears to be overshadowed by the alternative of quantity of life. But whose, the disabled person or their family or someone else?.

I can only speak from the experience of my daughter. I do not know what it is like for anyone else. I would never claim to know. But I do feel that it shouldn't be wrong to say what you really feel.

In the weeks that followed Emmy's death I think her sister, Charlotte, summed up perfectly the real impact she had on life. 'She was stubborn, bloody minded, wilful and determined'. How someone who lacked the fundamental functions that we all take for granted can achieve that, is testament to what was going on in her head.

I continue to live in amazement that she kept breathing for such a long time, and whilst I am relieved that she is no longer in pain, frustrated or so dependent, I do miss the courage she showed and the single mindedness that she must have had to keep going.

No one can understand the full impact that a life like Emmy's has on them until they have gone, and I am only beginning to come to terms with it. Good days bad days.

As a family we developed a very strong, if dark, sense of humour. It was the life boat that kept us floating. And when I think of the things we laugh about, I think of Emmy's hearty throaty chuckle that would appear, often at the least appropriate moment! To think that I was her voice is scary, because she must have often thought 'no I don't agree with you mum...that isn't what I want at all...'

I had to believe I was making the right decision.

We are all finding ways to miss her and celebrate her. Some are sadder than others. But it is our successes with the wars that have been fought that are the constant reminder that her life was not a waste of time. We did see change. The only sadness is that it was not enough, and that families are still facing some of the most unbearable and unacceptable fights. And these will continue.